Yaoi Wiki
Register
Don't have an account?
Sign In
Advertisement
in: Historical, Romance, Slice of Life,
and 7 more

Moscareto, Shu
Willow Love Story is a completed manhwa written and illustrated by Moscareto, Shu. Released in 2020, it has been published by Ridibooks. It occurs in the recent past of Korea with Omegaverse features.

From the moment of his birth until now, Han Sang Yul's life is not without lying. He was not the youngest son of Jodong medicine, but the chairman Han purposely took it from an Omega. Known as an Omega with a weak body but can only live as a subject of drug experiments, a drug so the body can react like other Omega.

Addressed as Hwang-ja, the prince, he notices that Sang Yul is trying to imitate an omega. Born as an Alpha at 20 he has is set on marrying Sang Yul. Considering matters that are like going against the wind Reok says how even the things he does not do will be his responsibility. Thinking about the Omega and Alpha classification he sees that as an image to plant in the public consciousness to at least erase the rumor that everyone is Estrus.

Led to believe that he is not an Omega nor a real son Sang Yul thinks himself to be an experimental tool. He is the youngest son of an Omega and at 18 he is to marry Hwang-ja. Sang Yul was undergoing experiments and answered that he knew the reason why he was born. He was warned to watch his mouth if he came into Reok's hands.

Acting as an advisor to Reok he questions whether it would not be nice to inform the people of the marriage in a more friendly way. He suggests that the prince establish a reporting system to favorably share the news.

Set in past Korea Sang Yul is to explain how his body reacts after taking medications. Word has reached others that a young man would like to be married as a royal bride on the 1st of May. Research conducted in foreign countries identified two representative traits between people who could be classed as Alpha and Omega. Prince Reok thinks to address prejudice he had no choice but to form connections with Jodong Pharmaceutical.[1] 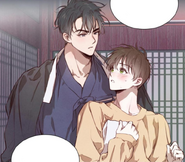