Bomtoon
Who's Your Daddy? is a completed manhwa written by Anko and illustrated by Kyunta. It has been published by Bomtoon. The original work is by Jang Ryang.

Louis, the commander of the Second Chief of Guards, is abruptly diagnosed as being "in the fourth month of pregnancy" while chasing a serial killer who is making a splash in the capital. Four months ago, an unforgettable night at the palace ball… Who did he spend the night with?

He has been having recurring dreams of being intimate with someone. Louis heads out for a training exercise and demonstrates how to overcome an adversary before experiencing sudden dizziness. Having been unwell for about four months Louis tells Peter last month he only ate fruits because he felt too sick, but he feels better these days. Louis is informed he is four months pregnant but has no idea who the father is. He asks Peter not to tell anyone, not even Sabrina. Speaking to Sabrina he gives the excuse that it is just mild anemia, and thinks how he cannot reveal that the smell of meat makes him queasy. As they discuss a murder case, with no contact from the 1st chief of guards Louis cautions Sabrina regarding the death penalty for defaming the imperial family. Having been invited to the ball the leader is hosting, Louis means to attend. With his sister Joan greeting him Louis asks how she is. He knows the man in the imperial family who was with him that night will be at the ball. Greeting his majesty and thinking they were close when they were kids Louis wonders why he is hated now.

Informed that there is a letter from the second guard Alexa comments on what should he do. There are several on his desk and Alexa speaks how the sender will have to wait until he finds him. At the ball he is surrounded by ladies yet makes eye contact with Louis. Regarding his highness at a masquerade balls does not believe it, Louis' statement does not hold water. Giving his name as Maetel, when told by Louis to call him what he wants Alexa hmphs that is no fun. He then settles on calling Louis white rabbit since he looks like one he lost while trying to go home a while ago. Asking whether Louis has lost weight Alexa raises whether health care is basic for a knight. When Louis would like to ask something Alexa clarifies whether he wants him to make time for him. Making time, Alexa tells Louis he should not look at people like he has seen something that bothers him. Lying that he had not received Louis' letters Alexa is asked to have the first security guard from the palace co-operate in the murder investigation. Alexa replies he does not want to, why should he himself be used. Turning to the matter of his missing rabbit Alexa feels it would be nice to get him back as he caresses Louis' cheek.

Addressing Louis as leader then chief she asks whether he forgot the demonstration today before asking him to please get ready then come. Saying for him not to overdo it, Sabrina is relieved to hear Louis say he will be fine. Bringing Louis a stack of paper Sabrina questions whether he is sick. On how little Louis has eaten Sabrina asks whether he is joining a beauty pageant or something. Stating that he cannot take this as nagging Sabrina states as a knight taking care of health is fundamental. Noting that it has been about ten days since Louis went home, Sabrina shares she only went home the other day. From the rope used on victims Sabrina conjectures that the murderer is likely to be a nobleman or a rich man. With where the bodies were found Sabrina adds they would need a wagon or an accomplice to move the body which means he is most likely a resident of the first guard, near the palace. Questioning what would they achieve within a hundred days of research Sabrina has sent several letters of co-operation to the 1st chief of guards. Shouting that it does not matter if they wait for a reply Sabrina informs Louis they will not get one because the crazy guy hates him.

The medical officer, not knowing what is going on Peter whispers on how Louis has been feeling weird for about four months now. Elaborating on whether Louis often feels nauseous and experiences an aching back, hip and stomach aches, Peter reveals that Louis is pregnant. Addressing him by the nickname Loui on account of how close they are, he speaks how they both dislike the crown prince. Shocked to hear that Louis does not know who the father is Peter says he is so stupid then questions what is he going to do.

A secretary, Louis mentioned how Leo brought him a sandwich earlier. According to Sabrina he got off work on time yesterday because he went on a date. Joining Louis and Sabrina he updates them they will not find the leader in the military office but they should go to the ballroom. Confirming that Louis got an invitation Leo wishes him good luck at the party.

Addressed as Joan she happily greets her brother Louis as Oraboni, the honorific term for Oppa. Warmly hugging him Joan wonders how his chest feels so strange then addresses how long has it been. Sharing that she has been going to the ballroom for the whole month Joan describes every day as being like torture. Most likely it would have been better if she had gone on her own. Regarding Chris attending a seminar on a weekend Joan is certain he just went out for a drink. Delighted to hear that there is a masquerade ball tonight Joan ascertains whether Louis is going to take her to the imperial palace ball. Calling for Lisa she tells her to prepare for the party, Joan needs to choose her dress and get her hair done. Confiding in Lisa, Joan feels if she went with Louis everyone would only look at her and Joan is afraid she will look too shabby. As she heads off with Lisa to prepare they are concerned there is not enough time and Joan does not hear that they still have six hours before they need to get there.

With Louis asking about him he is reported to have left early this morning for a seminar.

Dressed as a butler he shares with Louis that Joan and Lisa would not hear him as they head to prepare for the ball. As Holden speaks on Louis finding love, Holden says as long as there is no accident than any girl is fine.

Tending to Joan she suggests mending some of the white dresses that she has been wearing to the garden parties. Advising Joan to fix the ruby belt behind her waist and wear it long, she will then not look shabby at all. Lisa confirms it is true they are running out of time to prepare for the ball, but if they both do their best they will be fine.

After a night with someone whose face he does not recognize Louis opens his eyes to find Sabrina waking him. It is already past 10 o'clock but he demonstrates a training exercise outside. After he suddenly faints Louis regains consciousness to see Peter Elwin who informs him it is 7 o'clock. Discussing his four months of feeling unwell Peter reveals that Louis is pregnant. Sam Hwangja, along with The Duke of Serion, and Marquis Illyle, men of the Imperial Family are speculated to be the father as only their blood can conceive with the same sex. The "Blessing of Fecundity" is one of the seven blessings the heavenly god has given to the Imperial Family which allows for pregnancy under the circumstances. Louis considers the matter of bearing children but does not remember who the father could be.[1]

Louis asks Peter not to tell anyone. Giving excuses for his malaise to Sabrina they discuss the five murder cases in four months where they do not even know who the culprit is. The charges are torture, sexual assault, and serial murder. People with short black hair and white skin, of all sexes are involved. The first body was found four months ago in a back alley in their jurisdiction. Sabrina continues that victims were bound by a very high quality red industrial rope. She had sent multiple letters of co-operation to the 1st chief of guards but they have not heard anything back for four months now. There are rumors that letters with the leader's name on them get shredded without getting opened and he is not coming out of the military office where he only came out less than four days a year anyway. Leo joins them and shares details of a ball at the palace today that Louis means to attend. Alexa sits in his office, he has been receiving the letters yet they remain unopened on his desk.[2] 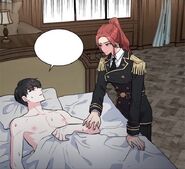 After an intimate dream Louis is woken by Sabrina 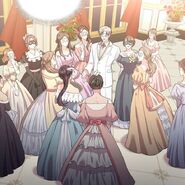 Seeing him Alexa speaks with Louis