Mokdang Jang
Walk on Water is a novel series written by Jang Mokdan, first released in 2018. A manhwa adaption is complete at sixty two chapters. Season 1 had 32 chapters. Season 2 had 30 chapters, from 33-62. An additional side story has 2 chapters. The manhwa was written by Jang Mokdan and illustrated by Jaxx, where it began in 2018. It has been published by Kidari Studio and Bomtoon, then in English by Lezhin US, and Tappytoon (which expired Mach 4, 2021).. Set in New York City, the world the characters take part in is based on the real one. Beginning with Ed introducing his boyfriend Creed to a friend, the story begins proper with a recollection of how Ed and Creed met then develops from there.

His original name is YeoWoon, he says to his boyfriend Creed that showing some effort is a good strategy for the meeting with his friend, Derek. Having quit acting Ed explains that he has never liked someone like Creed before. Not caring about what other people think, all he wants is for Derek to understand. In his first meeting with Creed he thought no matter where and how they meet there is no way they will ever be able to get along well. Ed considered Creed a man whose very presence shouts intimidation and that he would not even take the time to spare a glance at someone like him. However he was not too concerned, Ed thought Creed was not the type he would like to get along with anyway and would prefer not to be friends with a man who stands out so much. Ed has a tattoo under his right arm and drew it based on a dream after graduating from high school. Concerning his childhood since he lived among Chinese people in Manhattan Ed thought he was also Chinese until a few years in grade school. For sports he likes snowboarding and surfing and also regularly weight trains then also jogs. Ed aspired to be an action actor since he really liked Bruce Lee. He works as a security guard and has a cat named Empa. On it being normal how others know extremely personal information about him, but not his name, Ed is also struck with how such videos are usually a source of embarrassment for people yet actors look confident about starring in them.

Managing his own film production company, Creed gets along well with the production staff and the actors. Contemplating his choice of clothing he cannot seem to like the reflection in the mirror. Changing them since nothing really felt right, Ed figured it would be better not overdress and end up looking superficial. Considering this in the context of starting off on a positive note, Ed feels it would be better not not be late to a meeting neither ruin a first impression because he was dressing up. He thinks it is not like him to be nervous. Creed feels Ed is attractive in terms of both his looks and personality, further that he is someone who deserves to be loved by the people around him. When first meeting Ed he was surprised to receive the email since there are only a few Asian models for their videos. He has the complete set of Stanislavski's "An Actor Prepares" and offers to lend them to Ed where he opines that rather than an action actor he looks more like a drama actor.

She helps apply make up to in her words make Ed appear more handsome. Janine acts as an assistant for Creed and passes along the message for Ed to not ignore their messages when they contact again. Polite, Janine sends one such message for Ed to please give her a call when he sees the text and informs him the solo shoot he did was a huge hit. She is thought of by Ed as a smooth talker who made it sound as if there was not anything wrong with the filming sessions. Eating together with Ed she discusses business and Creed, then encourages Ed that he can still aspire to be an action actor as he wanted. She treats Ed to lunch with Creed's card. Seeing him she then states that Chang is totally her type. Janine is said to come across as proud and confidant to be working in the industry.

A security guard friend of Ed's who meets Creed and assaults him. He is angered at Ed for going too far in acting in a film to now dating the director who he saw on the news. Furious, Derek questions whether Ed has any self-respect and cries over the matter. He worked in security events with Ed together.

Acting on set of Creed's productions, he takes part in filming an act with Ed and has heard he works as a security guard. Unable to stop himself from laughing at the end of a take, Kyle had noticed Jennifer ogling and smiling so was unable to help himself.

Listed as 35, with a height of 181cm and weight at 70kg, Luke is a person who wanted to be filmed with Ed. Luke said he needs to leave right after the shoot since as a pretty well known real estate agent in New York he is scheduled to meet a client. He hands Ed his card for Leui Lehman afterwards.

Having viewed videos of Ed he would like to do a shoot with him so calls Creed to say so. He is with Kyle and Janine at a club where he meets Ed in person and gives what he calls his fake name of Lancer. Lancer asked Ed and was scheduled to film a scene with him yet his delayed flight meant that Creed took over since they had time constraints.

Having acted with Creed before he joins him and requests that Creed take him to England. With the roles already assigned Ryan attempts to persuade him to let him come since he is still raising a child and needs financial support for that. He is stated to have had good chemistry with Creed where their video gathered many awards.

A cameraman who wore glasses as he worked with Creed. With Lancer delayed he jokes that Creed arranged for the filming with him and Ed to happen.

Whilst recording scenes Jennifer is aghast to have had reactions to it noticed by Kyle. Whilst enthusiastic Jennifer is described as not the most diligent worker yet complies and fulfils Creed's editing requests.

Leaving two missed calls for Ed, he manages to contact him and says to come by his office. He is described as like a snake and Marlon Brando (from the Godfather films). Knowing him as a child Chang did not like Ed spending time with his grandmother since he feels Ed is replacing his deceased brother. Contacting Ed in person he questions whether Janine with him is his girlfriend. Chang compliments Janine's beauty before moving her along to speak to Ed that his application for debt assistance was rejected. He suggests Ed work for him rather than as a penniless security guard.

The son of a high profile mafia boss who works at the Chinese restaurant that is a front for the mafia's loan shark business. Nice to Ed, and providing dimsum after he pays back debts, Youyu wonders if Ed has won the lottery. Calling him Yeowoon and stating that he is family Youyu appears to harbor romantic feelings for Ed.

He was Korean and travelled to attain the American dream. Opening a small laundry shop, he raised Ed though he was largely indifferent to him. His Grandfather told Ed to not to talk about his mother and considers it good that she ran away after giving birth to Ed.

Chang's grandmother was an elderly woman who was suffering from Dementia. She lived next door to Ed and helped looked after him as a child. She called Ed "Xiao Ling" the name of her youngest grandson that died. Ling read to Ed and praised him for winning a medal.

Creed McQueen prepares to meet his boyfriend's friend and meets with Ed Talbot for the event. The friend, Derek does not react well since Creed is the producer of films Ed has been featured in even though Ed says he has quit acting.

Recalling how they met, Creed recommended that Ed should think of an alias before they proceeded to begin filming. The company premises has a swimming pool of the rooftop and after photos on set were taken Ed received cash which he needed for paying back debts. Afterwards there was so significant change in his life as Ed was dropped off at the bank. Contacting Janine he hears the idea to act with another person. A scene is filmed with Kyle with Jennifer recording as Creed monitors all the while.

In his security guard duties Ed is placed in a hot and tightly packed concert venue where a rock singer is performing. After receiving a call from Chang Liu he thinks of his financial status then reads a message from Janine informing him of the money transferred into his account.

Ed remembers his upbringing where he viewed a woman net door, Ling Bao as a grandmother. Thinking of how Ling and his own grandfather are now both gone Ed feels there is no one left that he can call family. He makes his way to Xi Jiao, a diner in Chinatown where the back room is used as a hideout for Chinese gang members to conduct their money lending business.

Saying Creed is a genius for the preview description 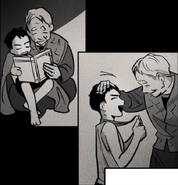 Ed as a child was looked after by Ling

Lancer and Kyle at a nightclub