Tale of the Yellow Dragon

Tale of the Yellow Dragon

Brothers Without a Tomorrow

With the screech of rubber and a crunch of metal, Dojin departs the mortal world, leaving behind his beloved sister and niece. He awakens in the kingdom of Yooguk, where the people call him “emperor” and serve a god named Yellow Dragon. Dojin soon discovers that Yellow Dragon called him to Yooguk for a purpose: to share his “life force” and protect the kingdom. As Dojin slips deeper into Yellow Dragon’s cold embrace, how far will he go in order to get back home?

Whilst he loved his brother and mother his love for Yooguk was greater. Aware that Dojin is not from here the yellow dragon is of the view that those who have much to say tend to be more easily frightened and voices that Dojin is a coward. Having a rest whilst Dojin slept he confirms the yellow dragon is him. He called Dojin to his world since otherwise his body would have perished there and then his soul would have ceased to exist. Sustaining Dojin's soul he confirms there is a way for Dojin to return to his world which is by becoming his emperor and protecting this kingdom.

At 24 he is all finished with deliveries yet Dojin is reluctant to accept leftovers from the restaurant for himself, his sister and niece. His only two family members mean the world to him. Dojin passes away after being struck by a lorry. Aware that he was still alive he was shocked at seeing someone appear and was thinking he could not die yet out of concern for his family. Wondering if it were a movie set he had awakened in, Dojin absorbs what Rat is saying. Dojin remembers her guidance to not look behind him when he falls through the door into the yellow dragon's keep. Wary that he could die from the drink he is to have, Dojin also concludes he has already died once so proceeds. He recognizes the human yellow dragon's voice.

Dojin's niece was born December 24. Calling her uncle she is excited to hear that he is bringing chicken and will stay awake until then. Myungjoo is starting school soon.

A zodiac animal spirit who says she is on Dojin's side. Like others she knows Dojin is not from this world where it was fate that he descended upon it. Rat explains the background of the lands, guardians and emperors to him.

The yellow dragon decreed his mother and brother as demons that undermined the kingdom where their defeat was for Yooguk's reign of peace. In present day Korea, Dojin is bringing dinner back for his sister, and niece, Myungjoo but paramedics who arrive at the scene of his accident find that he has stopped breathing. The yellow dragon appears and tells him to come into his arms and Dojin awakens in a location where he is seen as the emperor.[1] Citizens discuss how they hope the yellow dragon dissolves his anger and accepts the new emperor. Rat explains how in this world there are five kingdoms, Yooguk, Seorak, Dongju, Bukro and Namjin. Dojin is currently in Yooguk, which is situated at the center of the continent. The other kingdoms are North, South, East and West of their current location. Each are protected by their respective guardian gods. They in turn select an emperor that helps them protect the kingdom. Rat says that Dojin must do as the yellow dragon commands or he will not make it back to his world alive.

Dojin is taken to the Labyrinth and enters the keep where the yellow dragon resides.[2] Speaking with the person before him Dojin accepts the drink and falls unconscious after finding it sweet. He awakens in a bed where the yellow dragon joins him in person.[3] With Dojin wanting to return to his world the yellow dragon's method to achieve this is for Dojin to become his emperor. Sharing his life force will form a covenant between them.[4] 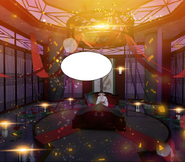 Dojin awakens in the room of the yellow dragon

The yellow dragon in his human form

Tale of the Yellow Dragon Wiki[]