Tan
Stalker's Game is a manhwa written and illustrated by Tan and published by Mr.Blue. The story involves a office worker named Hyunsung, who's dealing with a stalker accessing his house whilst he is at work.

Why did the stalker choose Hyunsung? It began with gifts. First, candies, milk cartons, confectionaries piling outside his small apartment’s door. Then, the meals. Dinner cooked and waiting for him, perfectly timed for when he arrived late from his mundane office job. Soon he began to accept it, the feeling of being watched, like it even. But why him? Who is the stalker? Can Hyunsung really let this continue... trust him? Or is it all just a game…

Feeling someone's eyes on him makes him feel sticky and receiving food deliveries from a stalker made fear a constant presence in his life. He arms himself with a frying pan when answering the door and thinks he has become hypersensitive.

Working in an office cubicle, hating it like everyone else where as the rookie he has to do the work others disliked. He feels it is sick that he thinks of his stalker as like a guardian angel for buying him food and tending to his home when away. Considering himself average, he often wonders why the stalker picked him.

He watches Hyunsung through a camera in his bathroom window, commenting on his hair sticking and how his expression is so cute. He also has a camera view from outside his apartment which he visits when Hyunsung is at work to leave groceries and clean the place. Meeting Hyunsung in person as he exits the elevator, he is wearing a hoody but does not hide who he is by telling Hyunsung that he should not skip eating even though he is tired.

A work colleague of Hyunsung, she is happy to receive rides home from another colleague.

Hyunsung feels he is being stalked, and answering the door he is polite to someone reminding him to remove trash from the corridor, to confronting someone outside his apartment who was handing out a flyer. At work, Hyunsung finds himself fatigued by his work colleagues increasingly tedious requests and people whisper about his state. Unknown to him, both within and outside his apartment, he is watched via hidden cameras.

Considering his situation, Hyunsung recollects a dream of him alone in a vast space of white where despite being by himself he can sense the presence of another. After Hyanggi is driven home by a work colleague, Hyunsung heads back to his after staying at work late. Exhausted, in the elevator he turns to someone in a hoody who has remarked that he looks even more tired than usual, but he should not skip dinner as the elevator doors close on him. Hyunsung registers who it was, and that the stalker was a man. 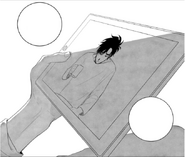 Admiring Hyunsung's hair and expression through a tablet