Yaoi Wiki
Register
Don't have an account?
Sign In
Advertisement
in: Romance, Comedy, Slice of Life,
and 6 more

Ker
Sign is a completed manhwa at one hundred and fifteen chapters. It is written and illustrated by Ker and has been published by Lezhin Comics. Soohwa Kang acquires a job at a café and learns the owner is deaf, yet he finds himself attracted to the voice Yohan Go has.

There are a few unusual things about Café Goyo. Number one, their coffee sucks. Number two, their customers never order off the menu. And number three, Yohan, the café manager, is deaf. So when Soohwa joins as a part-timer, though he is not expected to learn how to make good coffee, he is asked to expand his sign language vocabulary beyond the words, “higher,” “pay,” and “please.” But when Yohan offers to give him private lessons, Soohwa is reluctant. Not because he doesn’t want to study, but because he has a “hard” time around Yohan. Like, literally. He gets hard whenever he hears Yohan’s deep, sexy voice.

He is 26 (born April 14) and unemployed before requesting a job at a café. Soohwa states that he is good at making coffee, and gained the job out of practicality with rent due. In cases of him asking for a job to feeling that Yohan was ignoring him before learning that he was deaf, Soohwa reflects with embarrassment at perceived blunders on his part. Unable to read Yohan's handwriting, he questions whether it is a drawing. With how he feels about Yohan's voice, Soohwa's self-consciousness almost causes him to decline Yohan's help with learning sign language, but he agrees to it after seeing his downtrodden appearing reaction.

Yohan is 31 years old (born April 29) and is the manager of café Goyo which is named after him and though he is in charge of everything, he is said to not be able to make good coffee. He apologizes to Soohwa after being startled by him before Gyoon informs him that Yohan is deaf. Gyoon notes that Yohan rarely speaks since he thinks it is awkward not being able to hear his own voice.

Using sticky notes Yohan states that Soohwa can just talk to him normally and he can read his lips. Yohan has an interest in gardening and says he likes plants. Although with the menu his store has to capacity to be a restaurant he says a café just seems more cool. With Soohwa learning sign language Yohan types on his phone offering to teach him further.

He is 29 (born November 19) and works with Yohan at café Goyo. At first he flatly refuses to hire Soohwa since he states he is allergic to part timers, before relenting once he realizes Yohan would like him hired. Gyoon thinks he will intercede if a similar incident that occurred before happens again.

A 24-year-old (born December 30) delivery man who is friends with Gyoon. He is friendly and has learnt some sign language for the purpose of interacting with Yohan.

The person who fell for Yohan whose intimacy towards him was declined so decided to enact revenge on him which resulted in Yohan becoming deaf. Byung is the adopted younger brother of Gyoon.

A man who works for Byung who is asked to deliver plants for Yohan. After delivering them for four years he ended up wanting to quit. Hyunho enjoys talking to Soohwa and thinks of him as a little brother.

The chief secretary of K Group who is in love with the chairwoman of the company. Gyoon looks same with Won Lee yet Namwoo chooses to like Gyoon.

Chairwoman of K Group who dislikes her son Gyoon.

After Her other son (Byung Oh), threw a pot at Go Yohan's head: which caused him to become deaf due to ear trauma, she gave him money to create the cafe Goyo.

Soohwa's hoobae at the university he's attending. In a relationship with Hye-young Lee.

One of the two people that helped Soohwa Kang apply to Goyo Café secretly after Gyoon Oh stopped working there due to helping Jihye Cha with his study abroad program.

Soohwa's hoobae at the university he's attending. In a relationship with Hey-young Jung.

One of the two people that helped Soohwa Kang apply to Goyo Café secretly after Gyoon Oh stopped working there due to helping Jihye Cha with his study abroad program.

Soohwa Kang and Yohan Go are together only it is not a dream. Waking, Soohwa searches for an internet connection with access to that making it easier for job hunting. Finding one outside he is then accidentally soaked by Yohan who was testing out a hose pipe. Soohwa wakes up in café Goyo and with Yohan's pressing, Gyoon agrees with Soohwa's request to be hired. Soohwa is handed a beginner's guide on sign language.

Turning up at work Soohwa thought Yohan was pretending he could not hear him before leaning from Gyoon that Yohan is deaf. After Yohan speaks to Soohwa he heads home and slumps on the floor, besotted with Yohan's voice. When learning sign language from Gyoon and with him catching on regarding how Soohwa feels about Yohan's voice Soohwa finds it harder to act as he would like to.

Soohawa waking up to find Yohan

Asking if his writing is some kind of drawing 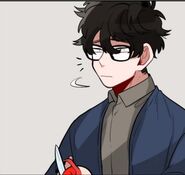 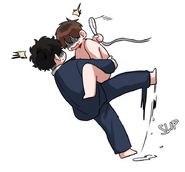