Pengki
Pond Snail Robber is a webtoon manga by Pengki which eschews the comedy tag yet is comical in nature. Ji Ho is attending college with his friend Hyeon-Ui and finds his own apartment thanks to Seong-Yeon. There he meets who he sees as a robber, Do-Jin.

The delightful and brutal life of living with a robber! Ji Ho ends up missing the deadline to apply for a dorm due to a slip of carelessness but luckily a sunbae from his major helps him get a room nearby. Unfortunately, not even half a day after moving in he gets attacked by a robber. After managing to get away, Ji Ho later comes back home to see the robber shedding tears over the novel he wrote in high school...But this robber, with the reason of wanting to continue reading his unfinished novel, asks to live with him in exchange for taking care of the house?! The sweet and fierce life of these two has started!

He finds Hyeon-Ui's concerns a bit much but understands where he is coming from. Ji Ho is twenty three with two older sisters and a younger brother, and has been calling in tardy to his classes before he can find a place to stay. Used to living in a small dorm with lots of people, Ji Ho was amazed at the spaciousness of his new apartment. He had secretly written a novel in high school to de-stress and took it with him out of embarrassment that his parents would find it. On the floor with a knife next to his face, Ji Ho thinks to calm down first, as if he could be in this kind of situation. Noticing the robber flinch, Ji Ho thinks to pretend to search for money then use the chance to run. His fear of the robber is intensified as Ji Ho frets that he talked back to the robber and even raised his voice. He considers him even scarier when he begins talking nicely as Ji Ho suspects he is putting on a facade. In a certain light Ji Ho thinks Do-Jin looks handsome and cute when cooking and offers to help. He is bothered that Do-Jin does not have a place to go and feels sorry for him. Ji Ho does not like to eat in the morning saying it upsets his stomach, his favourite food is spicy chicken stir fry.

Telling Ji Ho to turn his head as he pulls an embedded knife out the floor, Do-Jin remains in his apartment to read the story Ji Ho made. Suspecting he would call the police, Do-Jin took his phone and also guesses correctly that Ji Ho is the author of the book from his handwriting. Easily irked and calming himself down, he attempts to explain that he is not a robber and says it is Ji Ho's fault. After working at a convenience store, with no home to return to he came across a trail of items that led to Ji Ho's building. He thought to ask for an umbrella after returning the items, then the knife slid out and almost landed on his foot yet his goal was not to rob rather help return items. After waiting for Ji Ho to arrive back, he says to put it nicely he thinks Ji Ho might be scared of him so to alleviate his concerns he moves closer then offers to cook, clean and pay half the rent after Ji Ho makes an assumption. He underestimates Ji Ho when he says he can stay with conditions, and answers that he is 20. Do-Jin does not mind Ji Ho moving into his sleeping area, and Do-Jin sets his phone alarm for him. Ji Ho says he has an expression that looks like he just lost his country because Ji Ho has skipped a meal. He is also easy to cry, though having a quite expressionless face.

Guiding Ji Ho to his new apartment via a phone, he fires off questions on its appearance and other negative remarks on suspected dubious features of the property. Still worried, his break from work is over so he asks Ji Ho to send him pictures of the place. He appears furious that Seong-Yeon was eavesdropping on their conversation. Hyeon-Ui is equally angry and worried that Ji Ho had not been returning his messages. Also 23, he has known Ji Ho for five years and lived with him before he took a leave of absence. At a restaurant together he asks Ji Ho whether everything is okay at the house, noting that his face is glowing, yet cannot place his finger on why that may be. Seeing him again he wonders whether Seong-Yeon is following him. After attending a cultural event he remains in the clothing to enjoy the Spring weather whilst it is still here.

He used to be in the same group with Hyeon-Ui but has to retake the class, he is twenty five. Speaking to Ji Ho, Seong-Yeon says he has seen him a few times and recommends a room to stay in that is cheap to rent. He is famous for being rich. On his day off he headed to find Ji Ho after being called by Hyeon-Ui on his whereabouts. He assures them he has something to discuss with the professor when Ji Ho feels bad about bothering him and Seong-Yeon is overall mild mannered and helpful. Agreeing that someone can stay in the apartment with Ji Ho, he questions whether it is a lover. Coming across him, he remarks that Hyeon-Ui is dressed very cold and offers his coat.

Ji Ho's younger brother who he lived with.

A real estate agent at 53 years old who shares details on Seong-Yeon's apartment, after asking whether Ji Ho was a woman when he was the one to sign the contract.

After coming out of Kiyeok University station, entrance 3 and turning right, Ji Ho feels the downtown hubbub and walks in the state. He follows the directions on his phone from Hyeon-Ui until he reaches the Miso café and he will be living above it for one semester.

Two days ago in a lecture theatre Ji Ho mentions how he has been commuting from Cheongju to Seoul. Seong-Yeon approaches to speak to him and Hyeon-Ui which ends with Ji Ho having a place to stay. The year is off to a good start before Ji Ho finds a robber at his place. Escaping to the balcony, he falls asleep only to find him still there in the morning. Seemingly crying from reading his novels, Ji Ho ignores that and looks for his phone that the robber has.

Wanting him to write more books, the robber asks if he has a roommate if more time is needed to write them. Ji Ho believes he is a robber since he entered the property and tried to attack him with a knife. Do-Jin says he was returning items that fell through Ji Ho's bag, and tripped over a box and fell with the knife that missed Ji Ho hence the impression.

Hyeon-Ui calls Seong-Yeon to check where Ji Ho is. After arriving in the lecture room, Ji Ho remembers Do-Jin wanting to stay to help him complete his book and because he has nowhere to go. Seong-Yeon arrives in person before Ji Ho returns to his apartment where Do-Jin remains. After cooking he says his workplace provided board and lodging until now. His boss broke up with his girlfriend and blamed him and Do-Jin was reluctant to ask anyone for help since he feared being preyed on by the old ladies. Ji Ho agrees to allow Do-Jin to stay with him. 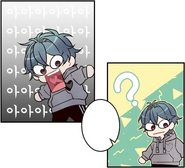 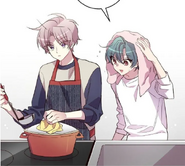 Asking if he can help with cooking 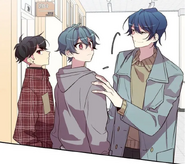 Retrieved from "https://yaoi.fandom.com/wiki/Pond_Snail_Robber?oldid=21457"
Community content is available under CC-BY-SA unless otherwise noted.