Painter of the Night

Painter of the Night

The eldest son of the Yoon family. Hearing about Na-kyum, he seeks him out having taken an interest in his paintings. He describes himself as an impatient man and can be exceptionally violent both in his temperament and using a sword. Aware of his reputation for promiscuity, Seungho tells Na-kyum he would never embrace a peasant. Wishing for Na-kyum to create works involving himself and others, Seungho is also intimate with Jihwa. Taking a poem Na-kyum owns, Seungho tells him he can have it back when he resumes painting. His manipulation would extend to bringing someone Na-kyum knows, In-hun to his as a means of having him comply with his demands.

Abandoned as a child, he was raised at the house of Kisaeng. A talented painter, Na-kyum would come to paint erotic themed art under a pseudonym before leaving having taken to drinking. At being brought back to Seungho's, he feels all the nobles are only noble in appearance after getting to know him. While hesitant to paint in the moment, Na-kyum is adept at painting a scenario from memory. After seeing the final result, Na-kyum ends up tearing his creation after considering it filthy. Na-kyum is happy to see his teacher, Jung In-hun join him at his new residence and paints for his benefit.

The subject of a painting with Seungho, he comes across the painter, Na-kyum again then wonders whether Seungho is looking at him or the painting. As a noble, regarding Na-kyum as a low born who has Seungho's attention, Jihwa's jealousy is expressed by pouring water over his paintings and laughing at the repercussions. Born August 25 his height is 181cm.

A poet that Seungho locates as a means of controlling Na-kyum. Also, In-hun is a teacher who educates children in literature. Considering the spacious residence, more servants than one can count, then with an abundance of riches and a name of influence and power, In-hun thinks Seungho has everything he does not have. Forming his own negative impression of Na-kyum's predicament, In-hun would judge him and not assist him. All the while In-hun is unaware he has been brought to Seungho's residence to essentially be a captive in order for Na-kyum to keep painting. Born December 12 his height is 185c.

Referred to as the younger master, he sends Seungho a letter before visiting his older brother in person. Informing a servant that he will not be stopped whatever the reason, Seung-won updates Seungho that their father's illness has gotten worse.

Receiving art supplies to deliver to Na-kyum, he feels those in the backyard, himself included, are being mocked as they are working while Na-kyum is playing by building snow people. Deok-jae raises that Na-kyum is well-fed, even getting snacks as well as expensive clothes bought for him by the master.

Referred to as the "No Name Assassin", it is the alias of a street beggar who also works as an assassin for hire. Mumyeong's mask and cloak conceals his long hair and burly physique. Since his operation targeting Na-kyum is taking time, he busies himself with being intimate with a woman as he awaits the chance.

The name of a lord who hears In-hun has passed the first round of the civil service examinations and has lord Yoon's support. Min suspects Seungho harbors feelings for Na-kyum and mocks him for falling for who he calls a low born. He is none too bothered at being beaten by Seungho in response. Min has a crush on Na-kyum.

Nakyum's noona from the Kisaeng. She is dressed in a Hanbok with her hair braided up, and is curious when she hears a painter is staying at Seungho's residence. Her height is around 5'7.

Yoon Seungho hears about the paintings Baek Na-kyum had been creating. Locating him, Na-kyum answers he is not the painter so Seungho strikes his assistant with a katana sword for the perceived lie. Unable to tell who is telling the truth since Na-kyum has fallen unconscious, Seungho has him taken to his residence. Asking again if he is the painter, Na-kyum tearfully denies it, but Seungho wants him to live there and paint more art of him being intimate with others.[1] After Na-kyum says he is unable to paint, Seungho notes he has both eyes and all ten fingers so he cannot understand why, but he could certainly give him a real reason to be unable to. Na-kyum proceeds to create the work of art, but has torn it in disgust. Seungho finds it and appears happy nonetheless.[2]

Painter of the Night Images[] 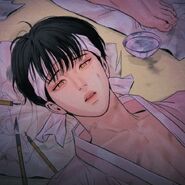 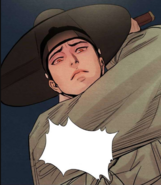 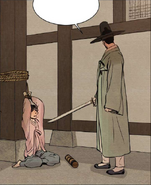 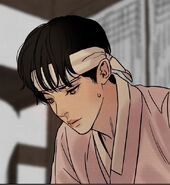 Na-kyum tending to his creation before the participants 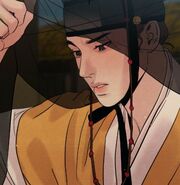