Maiden Rose is a Japanese manga written and illustrated by Fusanosuke Inariya. It has been published in English as Maiden Rose by Digital Manga Publishing under the Juné imprint since June 3, 2010. The series went on hiatus when Comic Aqua went defunct after the August 2015 issue on June 27, 2015. Serialization resumed on March 31, 2018 in the May 2018 issue of ihr HertZ. There is a side story titled Hyakujitsu no Bara dj - Luckenwalde no Heya de. that was released as a Doujinshi on August 14, 2009 and is complete at four chapters within four volumes.

A drama CD was released for the first volume of the Maiden Rose manga on June 29, 2007.

Two anime OVAs have been released by studio PrimeTime with the script by Yuki Enatsu. The two Hyakujitsu no Bara: Jinginaki Nikukyuu-hen specials at five minutes each were released May 29, 2009 to October 23, 2009.

Two soldiers from warring countries are bound by a pledge as master and servant. Taki Reizen is a Commander of sublime beauty, shouldering the fate of his nation. Called "Mad Dog" because of his rough temperament, Klaus has sworn his loyalty to him as a knight. Despite this, those around them are cold and disapproving, full of various misgivings. For all their genuine feelings, what will come of love made cruel by the violence of war?

Meeting Klaus when he was younger and asking for his help in acquiring a flower for his ceremonial headgear, Taki then asked Klaus if he would give himself to him and be his knight. Nine years later Taki has entered Luckenwalde Military Academy to learn how to operate tanks. After Eurote broke the treaty with the Western Alliance and invaded Dheedene, Taki was deported back to his country. In a combat based environment Taki is thought of well by others. Visiting the injured he is upset to learn of the wounds they sustained. Occasionally he reminds Klaus to know his place when in public and does not entertain any affections not even looking at him in some cases. This disappears when alone with Klaus where Taki is submissive to him. This is not due to the shame of being overpowered by a subordinate as Klaus suspects but because Taki was shown at a early age that a dog who bit their owner had to be euthanised. Directing troops in battle Taki uses the radio communications effectively and decisively intervenes when Klaus is in danger to save his life.

Meeting Taki again later, this time Klaus is under orders to get close to him. From observing and protecting him love would develop between them. The night after Taki was ordered to be sent home Klaus initiated their first romantic encounter. While he dutifully serves Taki and keeps close by to him Klaus is frustrated by Taki's distantness. In bed with him Taki continues the act even with people outside the door where he continues talking to them as if nothing is amiss. Among compatriots in a country foreign to him Klaus has a reputation as a "mad dog". Using his motorbike Klaus is able to get close to enemy troops who see him as one of them due to his appearance and apprehend them at gunpoint.

As the Vice Minister of Homeland Affairs Katsuragi is acquainted with Taki and Klaus where he is aggravating to them.

Taki's personal physician who has been tending to him from a young age. Suguri is serious about society's established rules. 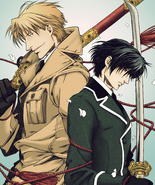