Zec
Lover Boy is a completed manhwa written and illustrated by Zec. Released in 2016 it has been published by Lezhin where an English translation is available. Season 1 consists of 47 chapters in addition to a special. The side story after has 5 chapters and an epilogue. Season 2 consists of 25 chapters, 48 to 72, plus an epilogue. The side story after has 9 chapters.

Remembering he was 11 Jaeha had his first marriage proposal from Eunho. 12 years later Jaeha attends a wedding to Hyesun. 2 years after that it ended in divorce. Speaking with it to Eunho then enquiring how he mother was Jaeha appeared downhearted in their conversation. After another shot he wakes up at Eunho's place. Stating that his stomach is messed up and he has a lot of work to do Jaeha has to go. He does add it was nice to see Eunho and he will buy him dinner next time. Inwardly Jaeha thinks there is not going to be a next time and he never wants to see Eunho again. Finding he has forgotten his wallet Jaeha considers they do say misfortune comes in threes. He teaches adults who were interested in arts, it is usually university students but office workers and housewives also come to an atelier he runs. Before and after his relationship with Shim he was also romantically involved with Hanjun. The age difference is a factor in seeing Eunho as a child.

When he was 3 he asked Jaeha if he wanted to get married. Overcome with shyness Eunho buried his face in his mother's apron. Finding Jaeha at his wedding Eunho congratulated him. It has been two years since he last saw him and Eunho is here since the location is close to his university and work, he adds his friends are waiting outside. 20 years of age he is happy to see Jaeha again and noticing his downcast expression Eunho questions if he is okay. In Jaeha's view Eunho has all the stereotypical traits of a science student, one of them is he pierces through the core of any problem, quickly and exactly, and this trait applies to how he deals with people as well. With Jaeha really drunk Eunho brought him to his place. Claiming Jaeha still acts the same Eunho suggests he go take a shower and he will make breakfast. After Jaeha departs Eunho sinks to his knees.

The eldest daughter of Shim Sangiun and Kim Wubok. Hyesun married Jaeha and appeared happy in a photo of them together. Her wellbeing is enquired about by Eunho. After the divorce Hyesun lives with her parents.

Laughing off her son asking Jaeha to marry him, she would be similarly cheerful when Jaeha asked whether it was okay if Eunho had sweets. Since it was Jaeha it was alright and she reminded Eunho to say thank you. In the present Eunho states she is doing great, always the same where she works during weekdays and goes hiking with his dad on the weekends. She is totally into table tennis these days.

Asked what he would do if someone said they had liked them for ten years Hanjun is not sure having not experienced something like that. Thinking he would be grateful Hanjun adds accepting the other person's feelings is not a bad idea. Hanjun and Jaeha then proceed to kiss and he is exceptionally caring towards him.

The story revolves around Yoo Jaeha and the eight-years younger Jung Eunho whom he grew up with. Since Eunho canremember, he has always had feeling for his older Hyung whereas Jaeha has never seen him in a romantic kind of way. Because they are almost ten years apart in age, Eunho has never been more than a younger brother-like figure to Jaeha. One day, when both are in their twenties and when Eunho had already given up on Jaeha, both meet again after having been apart for quite some time. Sensing a real chance, Eunho tries to pursue him one last time, but Jaeha doesn´t seem interested and, in spite of being polite and sensitive, shows a rather distanced attitude, keeping on pushing him away ...

Lover Boy has the ability to captivate and touch emotionally through its amazing art, it`s characters, and it`s originality. It targets both a younger and also a more mature readership due to the protagonists difference in age and their development in character. It is a very sensitively written and complex story with a lot of depth and insight. There is plenty of drama and heartache going on and the plot also awaits with some unexpected turns. All in all, the manhwa has a rather sad and gloomy tonality to it being slowly and calmly paced (in a positive way).

Both, Jaeha and Eunho, deviate from the typical seme–uke dynamic found in many yaoi manhwas. As characters they are rather fully fledged instead of being flat and stereotypical. So accordingly, they are far from flawless and it is possible to identify with both of them easily. While the uke is beautiful but dark and quite hopeless and gives off a strong vibe of coolness, maturity and depth, the seme impresses through his kindness and brightness, showing how much strength and love is needed to be able to wait for someone struggling to open up when at the same time dealing with one´s own pain.

In conclusion, it’s a story about one character who learns to have faith in life and love again and another one who matures to taking other people’s feelings and circumstances more into account arriving at the realisation that feelings alone sometimes just aren´t enough.

The story seems to be based on actual life experience since it feels so realistic, relatable and addresses issues like romance, love, trauma, fear, psychological coping mechanisms and their effects on our decision making. But most importantly it addresses the relationship towards oneself and how that may affect the outcome of more than one entire life.

Upon looking at the first page I immediately felt like the (mostly b&w) art was kind of special. I couldn’t help but instantly fall in love with both the main character`s faces, especially their eyes. Compared to other comics the artist somehow manages to capture their facial expressions and the emotions they give off up to the point of being almost photographic. – As if one is watching a real life movie. As a reader, you really get the feel of things, as if looking into a real persons face. Very on point and authentic. Also the depiction of motion, its detail (not too much though) and its timing (the timing of the scenes overall) is very on point and makes story and reading experience very smooth. Due to that (among other things), the smut also feels very emotional and intense. 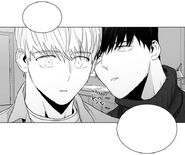