Love is an Illusion

Love is an Illusion

Love Is An Illusion

Lezhin
Love is an Illusion is a completed manhwa at ninety nine chapters. It is written and illustrated by Fargo. Released in 2018 it has been published by Lezhin. In a world with pheromones where anyone can conceive, Park Dojin becomes involved in Kim Hyesung's life.

Hyesung spent his entire life believing he was an Alpha, the top of the genetic lottery. But his world is flipped upside down when he finds out he isn’t a proud Alpha, but a lowly Omega. After this revelation, he continuously crosses paths with Dojin, an Alpha who can’t stand Omegas. When their physical union results in a life-changing event, the two men's hot-and-cold relationship is put to the ultimate test

Insisting he is an Alpha, Kim calls someone and voices that he got hit on by an annoying Alpha. Hyesung says he had spent all his money to attend the party he is at, looking all nice and handsome so he could find a rich Omega to restart his life. He appears genuinely shocked to learn that he is actually an Omega himself, believing otherwise since his test results when he was younger stated he was an Alpha. At the time he thought being an Omega sounded horrible, yet regardless of his result he was chastised as not being smart and good for nothing. He dropped out of high school during the last year and wandered from one job to another until he was twenty years old by the time he met Dojin. Born on September 23, at 20 years of age Kim had a height of 164cm, weight: 50kg. Zodiac Sign: Libra[1] He is currently 22.

From a family who are mostly composed of Alphas yet Dojin disagrees with the assessment that such a family is incredible because of that. He is also the lead singer in a band which is his current occupation. Attending a friend's party he would later contemplate this as a bad choice because Omegas were also invited to that party. Dojin saw his friend, the one who hosted the party, debating with Hyesung that he looked like an Omega. He thought that his friend was pathetic for being unable to differentiate pheromones like he can. Dojin later came across Hyesung in the comfort room and he smelled him. Disgusted, Park released his own pheromones to counteract Hyesung's. Dojin does not feel what he sees as a heat cycle and adds what Hyesung is experiencing is his problem. Nevertheless, he pulls Hyesung away when he is approaching other guests and takes him home out of concern to rest. The next day Dojin thought he will never see Hyesung again after walking out from him that morning. At a concert where Dojin performs, he finds and asks Hyesung why he walked out on the person who offered him kindness. He is currently 27 years old[2]. He was born on November 2[3]. Height:185cm. Weight: roughly 81kg. Zodiac Sign: Scorpio

Dojin's friend, a Beta who did not notice the Omega at the party they attended. He helpfully offers to find out how many are at the party, to then getting them something to eat. He considers a guest annoying, irate that he says whatever he wants even knowing he cannot face Dojin. Yoon helps Dojin further when he is performing on stage. He is currently dating Dojin's brother, Dojun, who is an Alpha. He is 24 and was born on June 18. Height: 174cm. Weight: 62kg. Zodiac Sign: Gemini

Hyesung's friend who is a Beta, and a fan of Dojin's band. He has Hyesung stay over at his with his roommate Junsu after he was fired from his job and helps cheer him up when he is down. Kyungsoo is in a relationship with Lee Chowon who was previously married to Dojun

Born the 8th of February, Park Byul is the son of Park Dojin and Kim Hyesung. He was conceived accidentally when his mother went into heat. He showed signs that he probably have dominant alleles because he is sensitive to pheromones similar to Dojin. Height: 61.5cm. Weight: roughly 6.3kg. Zodiac Sign: Aquarius.

Lee Chowon was previously married to Park Dojun, Park Dojin's older brother. After previously filing for a divorce, Lee Chowon struggled to cope with the loss of his husband despite filing for the divorce himself. Lee Chowon is a very attractive dominant omega, who captivates everyone who lays eyes on him. While struggling with his temper tantrums he is percieved as a very cold hearted, bossy and foul character, but his perspectives change after experiencing a relationship with Yoon Kyungsoo. Chowon is now working to repair the damage he has caused and change for the better.

Usually, it is determined by the age of twelve to fourteen whether or not someone is an Alpha or Omega. An Omega and Alpha cannot be distinguished that easily. It is generally decided by inheritance that someone becomes an Omega and they need to suppress their heat cycles by taking medicine.

They can have an Alpha's child, regardless of gender.

Can impregnate Omegas and release pheromones that attract them.

Irregular, unlike Alphas or Omegas and they do not emit or feel pheromones; average people.

The unique fragrance of Alphas and Omegas.

An Omega will give off pheromones that attract Alphas during this time.

Dojin can sense the presence of an omega at a rooftop party that he attends with Yoon. He overhears Hyesung state he is an Alpha before it is suggested he go and talk to Dojin. Hyesung walks away and is on his phone, having the intent to find a rich Omega, he is not concerned about being fired again and will prove the other speaker wrong that he cannot find someone.

The solution for him is an Alpha-pheromone infused perfume, and Dojin comes across Hyesung spraying himself with it in the restroom. As Hyesung is overcome with dizziness, Dojin steadies him and asks if he is going into heat.[4] With that not subsiding, Dojin takes Hyesung back to his where the latter remains adamant that he is an Alpha.[5] As Dojin composes music Kim awakens and realizes he is over at someone's house.[6]

After leaving the next morning, Kyungsoo would take Hyesung with him to a concert where he would find Dojin performing, who is startled to see Hyesung in the audience. Approaching him with a face mask on, he is berated for how Hyesung felt he was treated. Dojin joins his family who discusses the genetic make-up of their generation, and Dojin denies that he is meeting up with an Omega. 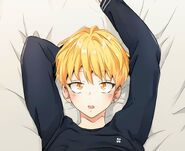 Hyesung with Kyungsoo, and his rabbit 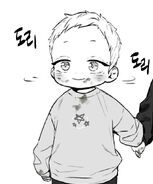 Byul is so cute!! 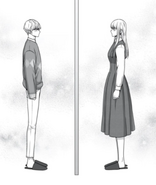 Hye-sung is reunited with his mother 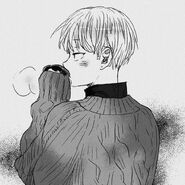