If You Hate Me So

If You Hate Me So

If You Hate Me That Much

If You Hate Me So is an webtoon manhwa written and illustrated by Fargo and published by Lezhin. It occurs at a college campus where student Minjae finds himself jn about what he saw between Hyung-jo and Woo Jinhan.

Surprised to come across Hyung-jo he can only stand before being further shocked that he has been noticed. His heart is pounding after the scenario and though Minjae thinks of it as him having caught Hyung-jo he is not interested in spreading rumors. The problem was that the scene was so vividly etched in his head that Minjae keeps dreaming about it. Whilst he listens to the rumors that students are saying about Hyung-jo and Jinhan he finds it unbelievable that they take every rumor seriously. He is mortified at hearing one mention that he bets Jinhan is screwing Hyung-jo and at that point Minjae slams his hands down and asserts that it is not true. His initial impression at Hyung-jo requesting that they head to class together is that he probably got the wrong idea, before thinking that it is none of his business. Confronted on possibly discussing Hyung-jo with the others leaves Minjae trembling but not out of fear rather arousal at Hyung-jo being near him. Flustered, Minjae shares the dreams he has been having of Jinhan. He does not really know anyone since he came back this semester after serving in the military at the end of freshman year. Minjae tells Jinhan that he finds it hard to keep up with all his classes.

After he is noticed, Hyung-jo approaches Minjae and speaks that what Jinhan does not know will not hurt him. He continues that if Minjae wants to tell other people about this then he can be his guest but that it will be the end of him. Hyung-jo then tosses the used tissue in a nearby waste disposal bin and departs. Some students observe that Jinhan is the only person he hangs out with and is deemed a weirdo for that and for not saying hi when Jinhan is not around. They had heard Hyung-jo was held up in high school because he had issues. Hyung-jo approaches them and questions whether they are talking about him. Turning his attention to him he asks whether Minjae has class now and thought he took World History. Heading to class together Hyung-jo makes it clear that he does not want others talking about Jinhan. Suspecting that Minjae had been doing as much Hyung-jo says he will make his pretty face very sorry before questioning why he should trust him. Hyung-jo is noted by Minjae as acting completely different around Jinhan where he behaves as a student to a teacher and defers to his directions to head to class.

He was asleep and wrapped in a blanket on a couch oblivious to what Hyung-jo was doing. Later Jinhan speaks to him in the cafeteria none the wiser. He is viewed as a T.A who only gives good grades to students he is close with. Finding Minjae and Hyung-jo together he questions whether the latter is bullying someone again, Jinhan told him to play nice. After reminding him that he has class to attend Jinhan adds for Hyung-jo to not forget about dinner tonight. He then inquires whether Minjae really was being bullied since it looked like he was harassing him. Jinhan does not appear convinced of Minjae's account that he was feeling unwell and Hyung-jo was supporting him. Seeing that he looks familiar Jinhan asks whether Minjae takes one of his classes. Stating that college should be fun Jinhan says he should hang out with him after class.

Minjae heads to pick up a survey from the student lounge where he finds Hyung-jo pleasuring himself. At home he continues to think about it. In the cafeteria Minjae sees Hyung-jo and Jinhan speaking before other students begin discussing rumors including ones on sexual orientation. Minjae and Hyung-jo seemingly head to class before Minjae is reminded of what would happen if he talked. Hyung-jo sees that Minjae is aroused and they trade accusations that they are perverts. Woo Jinhan sees them, sends Hyung-jo to class then invites Minjae for drinks afterwards.[1] 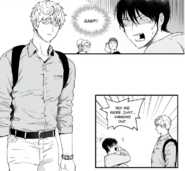 If You Hate Me So Wiki[]