Jung Seokchan
A Thousand Cranes is a completed manhwa written and illustrated by Seokchan Jung and published by Mr.Blue. Craig is working to pay off debts and support his younger brother, and then comes into contact with a murderer, Dean.

Craig has been thinking a lot about death lately. Working thirteen-hour shifts to pay off his father’s insurmountable debt, taking care of his little brother in between, exasperated and ready to collapse, Craig can’t help but wonder: would it be easier to end it all? It was just an ordinary day like this when Craig stumbled onto the scene of a bloody murder. Now Craig is on the run, pursued by a criminal organization’s most lethal member: Dean. In the hunt, however, the two soon find themselves chasing anything but death.

Practical, he considers living expenses for this month. He was fearful at spotting blood and feels sick from experiencing a murder scene. Not reporting it to the police at once, Craig is troubled by thoughts he is being followed or will be targeted. Taken to Dean's house, he is surprised at the spaciousness of it, and was caught off guard that Dean treated his injury. Craig does take into account that he could be trampling on Dean's feelings by escaping, but does leave a note promising that he will be back. He has to be there for his brother, Theo, vowing to protect him whilst he is still alive. Held by Dean after escaping and told to take money from his pocket to pay the taxi, Craig cannot tell if Dean is supposed to be scary or nice. He is paying off debts accrued by his father. Dean describes him as being in his early to mid twenties (later stated to be twenty five years old), roughly 5'9" in height.

Clutching a knife in an alleyway, he looks at but does nothing to a witness in Craig. He has a keen eye for details, noting Craig's appearance, and he has a good memory remembering him down to his facial expression. Experiencing insomnia and headaches, Dean replies the medication he is taking is useless. He finds Craig again tied to a chair, telling him to raise his head and to the surprise of others, Dean is concerned by the wound on Craig's head and empathises that Craig will have to work himself to the bone for the next thirty years to pay off his debts, and has probably been bullied by loan sharks in the past. At his home, Dean dresses the injury himself where suddenly he experiences the world taking on vibrant colors he had never seen before, and for the first time in his life Dean felt alive. After Craig escapes from his house after being told to stay there, Dean waits for him having gathered which taxi he is in. Seizing Craig, Dean tells him he is late.

An accomplice to Dean serving him for twelve years, he is quite boisterous and speaks with an accent that involves swearing. Looking into Craig's background, aware of his debts and no friends or family, he sees no reason not to off him. Since they will be getting busy tying up loose ends from a previous murder, he tells Dean to do it soon. Speaking to Craig on more familiar terms, Nicholas states he can be called big bro King. Not sure what to make of Dean sparing Craig only that it is certain to give him a headache, he tells the latter that living is tough enough as it is without Craig being picked up by people like them.

Craig's younger brother who he lives with. At college Theo attends a literature related class as he texts Craig asking where he is, scared at his lack of response to his message. Craig states that Theo suffers from panic related disorders. Coming across Dean for the first time, completely unaware of his background, Theo asks if he is Craig's boyfriend.

The president of HN CEO, and Dean's superior. From the way others talk about her, she is ruthless.

In Seoul on January 1st, Craig suddenly found himself considering his age. After work he heads home before coming across a pool of blood. Craig runs from the scene, and Dean is joined by an accomplice who details the witness, and has Craig's phone that he dropped.

Washing his face at home, Craig registers he just saw a murder scene. Theo joins and asks if he is feeling sick, and if so who is going to pay the bills, he has college exams coming up. With pressures mounting up, and working long hours to make ends meet, Craig simply sleeps. Dean knows of Craig's background and orders Nicholas to deal with it.

Dean attends a meeting with a therapist, and Craig finds himself troubled by the possible ramifications of what he witnessed. One moment Craig is crouching near an alleyway, before waking up tied to a chair. He hears people telling others to wait outside and not to let anyone through until they are done. With Dean entering, Craig tells him he has not told anyone, and does not remember their faces. Dean replies asking whether he wants to live despite his background. After tearfully saying he wants to live, Craig is driven back to Dean's spacious house, where Nicholas breaks the ice with the two of them quiet.

He leaves, and Dean sees to Craig's injury before receiving a call and departing. Craig is stirred from staying in the same spot out of concern that loan sharks will arrive when Theo is home. As Dean and Nicholas discuss the President, Craig's disappearance is reported but he has left a note promising to come back, yet Dean tracks him down first.

Saying to keep his scarf

Example of a plush animal moment 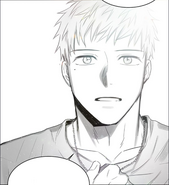