May 20, 2018 - Septeber 30, 2018
2013: Dawn of the World is a manhua written and illustrated by Fei Tian Ye Xiang. Originally titled 2013 it has been published by Kuaikan Manhua. Mo Ri Shu Guang is an ONA anime adaption produced by Tencent Penguin Pictures.

In the year of 2013, the tide of zombies outbreak exploded in everyone homeland, humanity launches a large-scale battle in the endless nights awaiting for the arrival of the dawn. The end is approaching, is there going to be a way out for them? Their faiths were shattered into pieces and buried in ashes in the raging fire. But within the blazing fire, a newborn hope arise once again.

Having passed the entrance exams to university after class Liu takes a book to read over regarding the infinite possibilities of the future. Unable to contact who he was calling Liu tells a friend nearby he is taking his car and will return tomorrow night with the tank full. After driving home Liu horrifyingly thinks this must be a dream at seeing a reanimated human. Trembling, he escapes the zombie by running back up the stairs, keeping the door shut, then acquires an axe. Considering how the news reported that the world is fine Liu thinks that means only he is crazy. Faced with another zombie Liu resorts to telling it to die as he wields the axe against it. In his vehicle Liu escapes but not before reversing into a zombie. Contacted by and picking him up Liu thinks how Meng is a childhood friend and he understands what he is thinking. Liu shouts how he is going to the hospital since his mother is there.

With the zombie outbreak he is come across by Liu and kicks a zombie away before joining him in his truck. Meng states that no one was picking up, neither Liu's phone or the home one. They were both born in the same hospital, grew up together, and attended the same schools. They were supposed to be in the same university but Meng missed the day of the college examinations. His father is an officer in the army and Meng's mother left when he was younger. Afraid that Liu was going to have an accident Meng asks where they are going but is against travelling to the hospital. Questioning where Liu thinks the infection originated he is concerned of that danger and that Meng will die. Regardless Liu tells Meng to not be so hasty and he will go with him.

Liu Yan is asked by a girl whether he knew that his classmate Menga Feng was in the army. Liu receives feedback on his work and receives a call from 'MA'. The news reports a city outbreak of rabies over the Summer. Governmental departments advise people to stay at home and wait until a vaccine is developed. They had quarantined communities and evacuated people who lived downtown, subway services have also been temporarily suspended. Over the phone Liu hears that the person he has dialed is temporarily unavailable.[1]

Telling a friend he is taking his car, by 18.20pm as Liu travels via the highway it is reported that the city's rabies are under preliminary control. The government requests that all residents outside the city do not return yet however as one highway lane is congested with vehicles leaving but Liu travels towards the city. Contacting MA he hears not to come home and to listen to mom. Asking what happened at home Liu questions where MA is. MA stares out a window covered in blood stained handprints and tells Liu that mama loves him. Liu reaches his empty home then hears a sound.[2] With a power outage Liu heads to the corridors to see an undead police officer.[3]

Fleeing from the zombie Liu finds a fire fighter's axe before returning to his vehicle. There Liu sees another zombie that notices him and he cleaves into its neck with the axe. Liu reaches his car to drive away from other zombies. With Meng calling Liu answers he is unsure of street he is on before seeing Meng run across the road. With them together Meng and Lui's childhood connection is recounted, where their paths only separated when Meng missed the day of the college examinations. They both intend to reach the hospital where Liu's mother is. 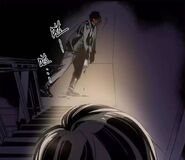 Liu finds a zombie in his apartment complex 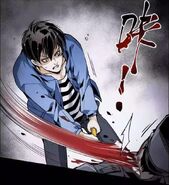 Attacking a zombie near his car

Picking up Meng after contacting him by phone 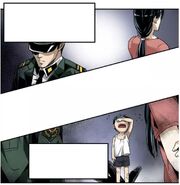 Retrieved from "https://yaoi.fandom.com/wiki/2013:_Dawn_of_the_World?oldid=25366"
Community content is available under CC-BY-SA unless otherwise noted.