September 2013 - (ongoing)
19 Days is a Chinese web comic written by Old Xian. After Jian Yi returns to Zheng Xi the chapters flashback to detail their daily events during high school.

19 days tells the hilarious story about the daily school life of a group of hot-blooded teenagers their touching friendship and personal growth. Featuring characters Jian Yi (见一) and Zhan Zheng Xi (展正希) who are childhood friends, the handsome He Tian (賀天) and the reluctant Mo Guan Shan (莫关山).

He has little regard for Zheng Xi's favorite manhua and sits on his limited edition video game as he helps himself to the drink Zheng Xi was just drinking. Yi also acts comfortable around Zheng Xi from leaning on him on a bus to falling on him as they walk and standing directly next to him in a public urinal. His penchant for outlandish stories includes one of him fighting a bully to save the world and explaining that his absence from school was due to him being taken by suited men and finding himself on a deserted island. At its most extreme at seeing Zhan Qian he thought it was Zheng Xi who had turned into a girl. When Zheng Xi nonverbally sought his help with a girl that was stalking him Yi's assistance included taking him away and announcing for them to go pee together. Even when he felt Zheng Xi was pulling away from him Yi said no matter what he was his best friend. Ever quick to be of help Yi would lift Zheng Xi up to help him with basketball and reasoned that Zheng Xi's hair was so tough because no one ever patted him on the head before proceeding to do as much. With his own hair being soft that others touched his hair was one of the few things that irritated Yi yet he was more than happy to invite Zheng Xi to touch it after asking how his mood was to cheer him up. Requesting that Zheng Xi help him with his homework Yi shares that he wants to go to the same university as him.

Having no patience for Yi's antics Zheng Xi would often push him away however he does pull Yi back after he staggered into a passerby. Thinking back to middle school Zheng Xi notes that Yi was really popular for some reason and always let him copy his homework. He was his best friend at the time. Zheng Xi was very aware that when he was picking rice that had fallen into Yi's hair, to being close to him, that other students were watching intently. Even earlier it was Zheng Xi who approached Yi who was on his own at a school play. Learning that Yi's mother is in fact an auntie that looks after him and that he does not have a father Zheng Xi wondered if he felt lonely. With that being the case Zheng Xi assured Yi not to worry since he was there. He is fond of playing both handheld and console games. When Yi was dispirited about the amount of homework he had Zheng Xi told him to come and play video games at his house. As they went out to eat Zheng Xi prevented Yi from getting too close to traffic and resorted to jumping after and catching Yi who went to retrieve his phone that was dropped. Back at home he is firmly against showering with Yi or sharing the bed with him but says he is handsome when questioned on whether anyone in class has a secret crush on him.

Zheng Xi is her brother who she lives with, Qian is happy to hug him. Being a pro-level gamer she is delighted to hear that Yi and Zheng Xi will be playing video games and wants to play too. Qian even promises to lose on purpose to give Zheng Xi a chance. She enthusiastically shows off her new face mask which keeps her eyes covered before a scene of Yi pulling Zheng Xi's pants down after a drink was spilled on them. Qian does not join them for lunch since she plans to eat at her grandma's later.

With fawning girls around him Tian answers that his favorite animal is a golden retriever. Acquainted with Yi he suggests that they play ball after school. Hearing that Yi is heading to the cinema with someone Tian assumes it is a date. Having a question Tian adds that if Yi cannot answer it then there must be something wrong with his IQ. Asking what sound a cat makes when Yi replies Tian deems him obedient. Without any meaning behind it he sprays Yi with a hose before finding it boring that he enjoys it and they mutually swear at one another. Regardless of back and forth innocuous behaviour Tian does take the side of Yi and Zheng Xi when a group means to assault Yi. Even when one of the attackers, Guan Shan, used a rock in the fight Tian approaches him without a care to speak casually on his state before noting that he lives nearby. When Tian is threatened by Shan he could not hear what was said before Tian grabs and pulls Shan and intends to make him prepare food for himself.

After being walked into by Yu accidentally he means to physically confront him over the matter.

Jian Yi and Zhan Zheng Xi experience daily life together. It is remembered how they knew one another as kids where their friendship continued through middle school until Yi disappeared. Presently Zheng Xi asks Yi where he went during that time. 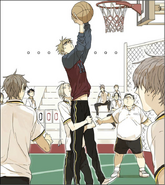 Beaming whilst nervous, it is Yi's first time at Zheng Xi's

It dawns on Zheng Xi where Yi is situated